The Heitger Funeral Service
Serving our Community for 142 years

Ten year old Anton Heitger immigrated to the U.S. with his family in 1851 from his native Prussia.  Settling initially in Milwaukee, the Heitger family soon moved to Massillon where Anton learned the trade of cabinetmaking.  After working a while in the furniture industry, he served two years in the Union Army during the Civil War.  In 1869, he married Mary Ann Klipfel, not long before establishing his undertaking business, the first in Massillon...and a few years later, a floral business that remained until 1928.  Sons, Otto and Leo, ultimately took over the business in 1918 and introduced the first motorized funeral coach to the area.

In 1922 a new facility was built at the location of the business today, 1st St. N.E., in Massillon.  Otto's son and two of Leo's sons carried on the family undertaking tradition with their fathers until Otto's retirement and son, Edward's departure from the family business in 1939.  Leo's third son, James, joined his brother, Bob, in 1952 after their father's retirement.  Bob had been active in the business with his father, Leo, since graduating from Cleveland Mortuary College in 1947.  Fourth generation, Jeffrey, joined his father, Bob in 1979 after graduating from the Cincinnati College of Mortuary Science.  He continues in the family tradition to this day, with his wife Cathi who is also a funeral director and preneed counselor for the Heitger Funeral Service.  A new chapel was added in Jackson Township in 1988.  For 148 years, the Heitger family continues to serve the people of Stark County.

Since 1869, Heitger Funeral Service has helped Stark County families in one  of the most trying times of their lives.  Today, we continue to provide the same concern that has become our trademark.  When you are faced with arranging a funeral, it helps to have someone to turn to - someone you know and trust to take care of the details. 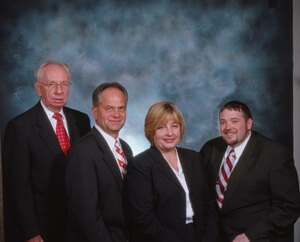 Jeff Heitger, Bob Heitger, Cathi Heitger, and Frank Gadd are all licensed funeral directors. Feel free to contact any of us at any time.

A year of daily grief support

Our support in your time of need does not end after the funeral services.  Enter your email below to receive a grief support message from us each day for a year.  You can unsubscribe at any time.